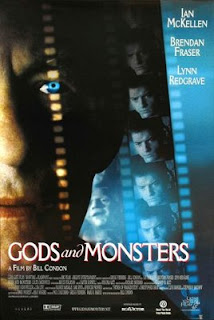 It's not that often we get a glimpse into a director's personal life on the silver screen. Sure, they might be mentioned in memoirs, but do you see it acted out?

The two veteran stars of Gods and Monsters are Ian McKellen and Lynn Redgrave, both nominated for Oscars. They provide certain quirks to the movie's allure. McKellen is flamboyant while Redgrave is reserved. Both are polar opposites yet they have wonderful chemistry together on screen.

Brendan Fraser usually gets a bad rap since most of the movies he's in could have been written by a five-year-old. But he really impressed me in Gods and Monsters. He clearly shows that he can act. Personally, I think Fraser's one of those names working in Hollywood who needs a good script tossed to him every once in a while.

Gods and Monsters is such a wonderful movie. It shows a simplicity within the emotions and dialogue. It may rely on the subject of homosexuality most of the time, but that aside it's a marvelous film.