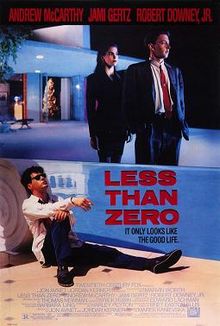 Media about addiction always manages to intrigue me, but recently not so much. I don't know why that is. But I think after I saw Requiem for a Dream last year, most other depictions of addiction and dependency pale in comparison.

Heading into Less Than Zero, I was already aware of Bret Easton Ellis', um, "quirky" sense of humor from reading American Psycho. From what I read, Ellis wasn't too pleased by the adaptation of Less Than Zero. After seeing the finished result, I'm tempted to read the book.

My main complaint is that the acting is stiff as cardboard. The only natural performance is from Robert Downey, Jr., perhaps because at that time he was living his life like Julian. We see his addiction eating away at him as the movie progresses. And just when it looks like he can't get into a deeper hole, someone throws in a shovel.

All in all, I wasn't too impressed by Less Than Zero. The storyline felt flat and loses something when Downey's not on camera. Basically, if it wasn't for Downey, I would've avoided this.

My Rating: ***1/2
Posted by MovieNut14 at 3:58:00 PM
Email ThisBlogThis!Share to TwitterShare to FacebookShare to Pinterest
Labels: 1980s, movies, reviews