Johnny Got His Gun 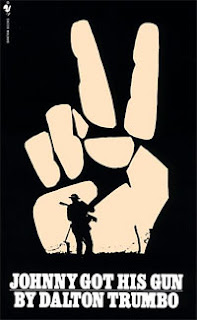 Dalton Trumbo is one of Hollywood's most famous screenwriters. Even with his infamy  as part of the Hollywood Ten, his writing always captivated an audience.

His novel Johnny Got His Gun has to be one of the most harrowing things I've read. It's told in the third person, but it's from the point of view of Joe Bonham, a soldier who lost his limbs and face in battle from a bomb. It's very claustrophobic reading.

The story interchanges from Joe's life before getting shipped off and Joe lying in the hospital. It's sad to see him go from a charmed life to being a prisoner in his own body, unable to express what he's feeling.

Johnny Got His Gun is one of those books where no matter how many times you try to stop reading it, you can never put it down. Seriously, it's that good. Trumbo's writing packs a wallop, but it also makes Johnny Got His Gun as something I don't want to read for a very long time. Kind of the same effect Requiem for a Dream had when I watched it.

My Rating: *****
Posted by MovieNut14 at 9:43:00 PM
Email ThisBlogThis!Share to TwitterShare to FacebookShare to Pinterest
Labels: books, reviews