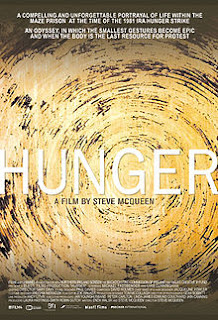 With X-Men: First Class released this past weekend, some people were introduced to a rising talent by the name of Michael Fassbender. I say some because most people were already aware of him from three movies he did in the last few years: Hunger, Inglorious Basterds and Fish Tank.

In Hunger, we watch Fassbender first physically overpower the police. In the second half, we watch him just deteriorate before our eyes. I'm not sure if he lost more weight than Christian Bale did for The Machinist (sure looks like he did), but watching him literally get reduced to skin and bones is pretty horrific stuff.

For a movie that says a lot, there isn't much among the ranks of dialogue. It's all about the mannerisms of the people shown. Dialogue rarely matters in a movie like this.

My only problem with Hunger was its pace. I found it a little slow for my tastes. I still thought it was a good movie. It's just the pace was a little bothersome to me.