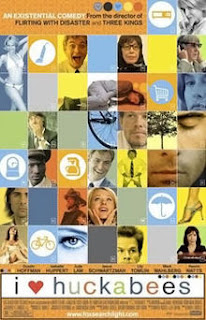 I have seen quite a few weird movies in the last few years. Some are weird because you have to pay close attention otherwise you'll lose focus (and the movie's still weird). Others are just weird because the plot's all over the place.

I Heart Huckabees definitely falls under the latter. The plot's bizarre to begin with and it only gets stranger as it unfolds. The concept's interesting, but it just makes for a very weird movie. I wonder what it would've been like had Wes Anderson directed it.

The cast is star-studded, but the two I liked best were Jude Law and Mark Wahlberg. They are both the supposedly serious parts of I Heart Huckabees, but instead they were both the scene stealers.

I Heart Huckabees as separate parts is good. As a whole, however, it's so-so. It's just a jumbled mess of who knows what but I was slightly amused by it. But all in all, it's not that good of a movie.