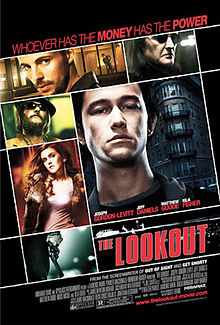 I've said it before and I'll say it again: I love underrated movies. I find new ones almost all the time too, so that makes it even better.

I have always liked Joseph Gordon-Levitt. After watching him in The Lookout, that slight appreciation had deepened into an admiration. He's really great in this movie. Usually he's nebbish in some of his roles (10 Things I Hate About You, (500) Days of Summer); here, he's anything but.

The movie reminded me of both Memento and Wait Until Dark. Memento because the lead character suffers from a brain injury and is drawn into a crime, Wait Until Dark because a group of thieves take full advantage of the lead character's handicap. I'm not saying that director/writer Scott Frank ripped off those two movies; I believe he made slight improvements to those concepts.

The Lookout has to be one of the most awesome heist movies I've seen. All of the characters introduced have an appealing nature to them. It feels dark in some scenes, but that barely matters for a movie that kicks some serious ass.

My Rating: ****1/2
Posted by MovieNut14 at 7:11:00 PM
Email ThisBlogThis!Share to TwitterShare to FacebookShare to Pinterest
Labels: 2000s, movies, reviews