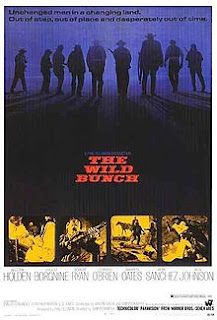 When the 1960's were coming to an end, there was a revolutionary movement happening in the world of film. It was the beginning of the "New Hollywood" generation, one filled with obscenity, blood and the occasional nude scene.

One of the more prolific movies from that time was Sam Peckinpah's The Wild Bunch. It was released in 1969, the same year Butch Cassidy and the Sundance Kid and True Grit, two other famous westerns, were released. The main difference between The Wild Bunch and those two? Let's just say The Wild Bunch isn't family friendly.

Man, and I thought the finale for Bonnie and Clyde was nasty. You only need to watch about five minutes of The Wild Bunch to see how Peckinpah earned his nickname "Bloody Sam". Ugh, nasty.

Don't get me wrong. Violence aside, I think The Wild Bunch is one of the best westerns I've seen. It shows humanity slowly adapting to changes in the world and those not willing to accept those changes. It's not for the squeamish, yes, but it's also not one to miss.

My Rating: ****1/2
Posted by MovieNut14 at 6:57:00 PM
Email ThisBlogThis!Share to TwitterShare to FacebookShare to Pinterest
Labels: 1960s, movies, reviews