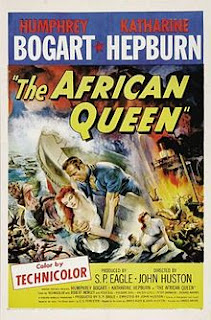 I like it when actors I admire work together in a movie. Usually the chemistry works, but I don't mind if it doesn't.

The pairing of Humphrey Bogart and Katharine Hepburn in The African Queen is an amusing one since they have completely different personalities. Bogart is brash and a little uncivilized; Hepburn, however, is refined and couth. Even with that in mind, their moments on screen are wonderful.

A lot of people know the living hell that was the production of The African Queen. Most of the people involved got sick, but Bogart and director John Huston escaped illness because of their drinking. Bogart even quipped this: "Whenever a fly bit Huston or me, it dropped dead."

The African Queen has Bogart and Hepburn in some of their best work. Huston, of course, knew how to churn out great performances from his leads. The African Queen also has a little bit of everything: action, romance and one hell of a story.