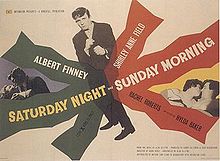 I like watching movies that feature notable actors and actresses in their big breaks. It's always amusing to see how they started out.

In the case of Saturday Night and Sunday Morning, the actor is Albert Finney. He plays Arthur Seaton, a young man bored with his weekly routine and tries to liven it up on the weekend with alcohol and women.

Now it sounds quite common, but Arthur has found himself torn between two women. One is older and married, the other is young and sensible.

I was already familiar with Finney from Murder on the Orient Express, Big Fish and Before the Devil Knows You're Dead. But one of his earlier works? I had nothing in that field. And I gotta say, he was quite the looker back in the day.

Finney's performance aside, there's not really much else about Saturday Night and Sunday Morning that's memorable. It's actually a pretty depressing movie. It's still good but barely.

My Rating: ****
Posted by MovieNut14 at 5:48:00 PM
Email ThisBlogThis!Share to TwitterShare to FacebookShare to Pinterest
Labels: 1960s, movies, reviews