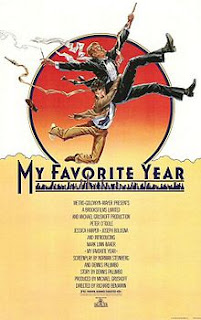 Oh, Marya and Kristen. Why did you two get me so interested in Peter O'Toole in the last few weeks? I'm blaming you two, but I'm also thanking you.

Although I like O'Toole's serious work, I really like it when he does comedy. He previously showed his comedic side in How to Steal a Million and The Ruling Class. Here in My Favorite Year, he continues to crack me up with his wit, lines and physical humor.

Here, O'Toole is Alan Swann, a homage to Errol Flynn. He is to appear on a comedy/variety show, but the writers are concerned that he won't show up sober or show up at all. Knowing what Flynn's lifestyle was back in the day, it's clear that Swann is a definitive homage to Flynn.

My Rating: ****
Posted by MovieNut14 at 6:01:00 PM
Email ThisBlogThis!Share to TwitterShare to FacebookShare to Pinterest
Labels: 1980s, movies, reviews