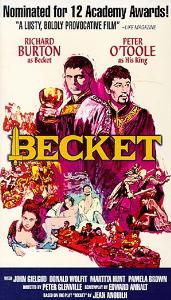 I'm usually not a fan of costume dramas since they feel a tad stuffy to me. But I do like the performances in them.

Peter O'Toole is becoming an actor I'm starting to like. Two of his Oscar-nominated performances (Lawrence of Arabia, The Ruling Class) and a lighter performance (How to Steal a Million) out of the way, I was already aware of his work. Here, he continues to impress me.

Richard Burton I was also familiar with. Having seen Who's Afraid of Virginia Woolf? and The Night of the Iguana beforehand, I was quite aware of his talent. If you ask me, Burton gives the best performance in Becket.

As stated above, I'm not a fan of costume dramas because of their stuffiness. Had it not been for O'Toole and Burton's performances, I probably wouldn't have watched it. Throw in the fact that the writer didn't do enough research as well. But Becket is still a very good movie. Although it's neither O'Toole's or Burton's best work (for O'Toole, it's Lawrence of Arabia; Burton Who's Afraid of Virginia Woolf?), they give good performances. So if you're a fan of costume dramas like Andrew and not me, you'll like Becket.