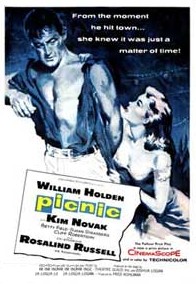 Eve though the 1950's were my favorite time period for movies, there were a few misfires from that time.

By now you should know that William Holden is one of my favorite actors. It's not because he look great without a shirt (which he does) but the fact he possesses an anti-hero persona. As Hal Carter, Holden is bit of an anti-hero (and shirtless for most of the movie). It's a good performance, but it's far from being ranked among his best work as an actor.

Kim Novak is becoming an actress I'm slowly starting to like. She has this aloof personality that most actresses don't possess. As Madge Owens, she accepts being called the prettiest girl in town even though she can't stand the attention. Like what I said for Holden, Novak gives a good performance though it's far from being ranked among her best work.

For my money, the best work comes from Rosalind Russell who, had she not been so stubborn with the campaigning, would've most likely won an Oscar. The movie itself I wasn't too crazy about. It has its moments, but it falters ultimately.