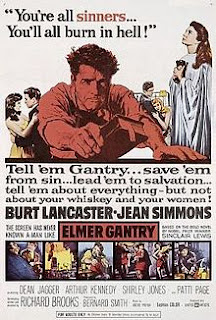 Once the 1960's rolled around, you could tell that the rules of censorship for movies were starting to fall apart. Dialogue became vicious, performances more ruthless and movies had no boundaries.

That statement can definitely be applied to Elmer Gantry. It shows the intense nature of people's religious beliefs of the time the movie's set.

Burt Lancaster, as we all know, was a powerful presence on screen. His performance reminded me of Robert Mitchum in The Night of the Hunter. Both men are wolves in preacher's clothing, but they also have a chilling aura when they stand at the pulpit. It's an excellent piece of acting from Lancaster, but it pales in comparison to the ruthlessness of J.J. Hunsecker.

It's clear on how Lancaster (and, to a lesser extent, Shirley Jones) won an Oscar, but I don't understand how Jean Simmons wasn't even nominated. She gives honestly one of the best performances I've seen. She may be one of the many corrupted by Gantry's views, but she keeps her morals intact.

To sum things up nicely, Elmer Gantry is an excellent movie. Wonderful work from Lancaster and Simmons as mentioned above. If you ask me, it's a really powerful movie.