Hello, My Name Is Doris 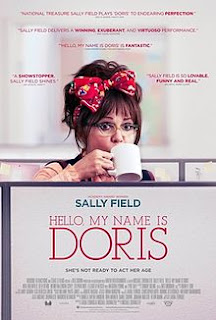 Many times we've seen the older man pursue the younger woman (or, on rare occasions, the younger man), a sometimes pitiful attempt for them to feel young again. Sure, it's a familiar formula throughout fiction but why does the inverse so seldom happen? Is it simply Hollywood's so-called fear of showing women as more than just props?

Michael Showalter's Hello, My Name Is Doris is a nice example of the latter situation though decidedly of a less serious nature than other fiction of this nature. (Apparently men pursuing women is expected while the reverse is a sign of desperation.) That said, it still works.

In the title role of Hello, My Name Is Doris is Sally Field, who like many actresses in her age group tends to get the short end of the stick when it comes to roles as of late. (She has two Oscars, for Pete's sake!) But here, she shows that she's always a welcoming presence.

Hello, My Name Is Doris also depicts an attempt to live one's life after most of it has already slipped by. There's no real deadline in having your life entirely in order. It's fine if you try new things at different points of your life. All that matters is that you're happy doing them.

Aided by a solid performance from Field, Hello, My Name Is Doris is an endearing title. It shows the awkwardness behind casual relationships, a normal aspect found within life. Nobody and nothing in life is perfect or goes as planned. We just have to find a way to make it work for us personally.

My Rating: ****
Posted by MovieNut14 at 10:35:00 PM
Email ThisBlogThis!Share to TwitterShare to FacebookShare to Pinterest
Labels: 2010s, movies, reviews