Order in the Court! The Classic Courtroom Movies Blogathon 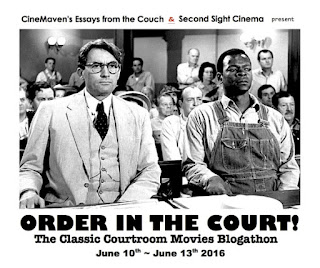 Theresa of CineMaven's Essays from the Couch and Lesley of Second Sight Cinema have teamed up for this examination of courtroom pictures. There have been many over the years from comedies to dramas to thrillers. My film of choice?


Sure, you may have been thinking more along the likes of To Kill a Mockingbird or 12 Angry Men but I wanted to focus on one not often held in the same regard. (Also I wanted an excuse to re-watch it.) 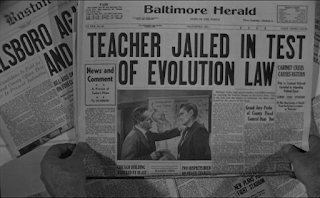 Adapted from the play by Jerome Lawrence and Robert E. Lee, Inherit the Wind was based on the Scopes "Monkey" Trial back in 1925. Easily one of the most famous court cases of the 20th century, Lawrence and Lee's play was more of a reaction towards McCarthyism (much like Arthur Miller's The Crucible). But Kramer's film draws on elements that inspired this particular story. 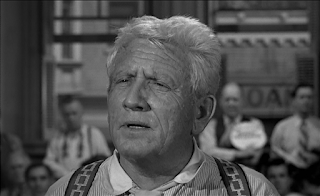 As defense attorney Henry Drummond (based on Clarence Darrow) is Spencer Tracy, one of two double Oscar winners among the cast. (He also got a nomination for his work here, and, in an ironic note, lost to Burt Lancaster for Elmer Gantry.) Being an agnostic, Drummond and his beliefs aren’t exactly smiled upon by the pious people of Hillsboro. But he's determined to do the right thing. 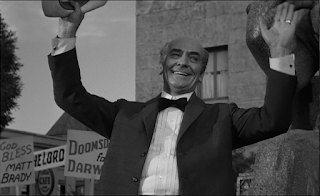 As prosecutor Matthew Harrison Brady (based on William Jennings Bryan) is Fredric March, the other two-time Oscar winner of the cast. Brady has a bombastic nature to him, the kind that always tries to get the last word in. ("He’s the only man I know who can strut sitting down", Hornbeck deadpans at one point during the trial.) But it's this trait of Brady's that will ultimately be his downfall. 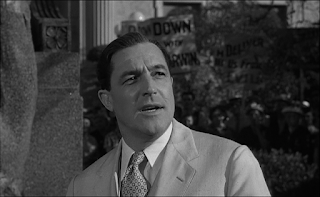 Much like Fred Astaire in On the Beach (coincidentally also directed by Kramer) the previous year, Gene Kelly steps away from musicals and sharpens his teeth on a more serious role. In stark contrast to Don Lockwood, his E.K. Hornbeck (based on H.L. Mencken) has a sardonic streak, the real nasty type that most fictional journalists tend to have. Clearly Kelly had strong potential as more than just a song-and-dance man. 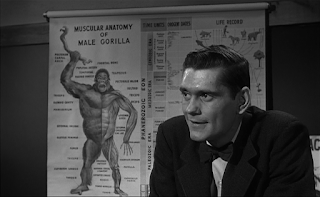 A few years before his star-making role on Bewitched, Dick York plays the accused Bertram Cates (based on John Scopes). Admittedly he spends much of the film as more or less the catalyst of the film's events but the moments he does speak up, he makes it clear that he doesn't want to be viewed as either a pariah or a martyr; he just want to be someone with their own independent views. 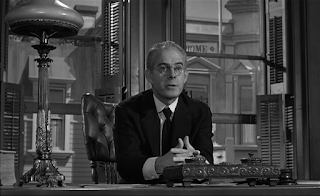 As presiding judge Mel Coffey is Harry Morgan, one of the quintessential character actors of Hollywood's Golden Age. A good fifteen years before his most famous role on M*A*S*H, Morgan plays peacekeeper for the attorneys' raging egos. (A task easier said than done a good chunk of the time too.) 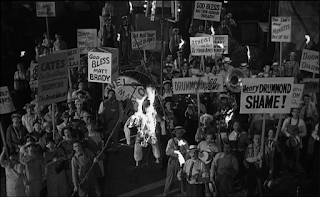 As is often the cases with fictionalized accounts of real-life events, Inherit the Wind does embellish a few details of the Scopes Trial. For instance, the people of Hillsboro are depicted as fervent (and ignorant) Bible thumpers. In real life, the people of Dayton, Tennessee were just spectators to this historic legal case, nothing more. 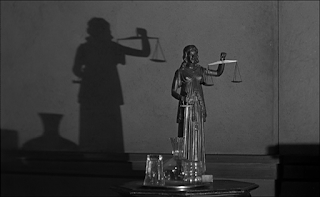 Inherit the Wind was one of several courtroom dramas released within a span of five years. (Kramer and Tracy followed this up with Judgment at Nuremberg, another solid based-on-real-events film.) But considering some of the other titles of 1960 like The Apartment and Psycho, it’s understandable as to why Kramer's film doesn't often get the same recognition. And seeing as how we currently live in a society where difference of opinion is a regular thing, there are some things that resonate all these years later. 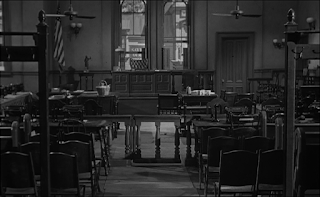 Posted by MovieNut14 at 11:45:00 AM
Email ThisBlogThis!Share to TwitterShare to FacebookShare to Pinterest
Labels: blogathon/meme