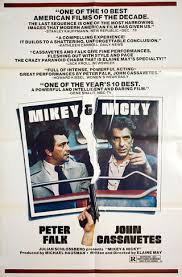 In stark contrast to her earlier films A New Leaf and The Heartbreak Kid, Elaine May's Mikey and Nicky is noticeably of a more tense nature. From the get-go it displays a more paranoid nature, thanks primarily to our first impression of Nicky (John Cassavetes). That said, there are some telling clues that this is a May film through and through.

How so? Much like A New Leaf, Mikey and Nicky maintains a very dark sense of humor. (It's mostly telling with Ned Beatty's character.) Though she's dabbling in a new genre, May wants to make it clear that this is her handiwork.

Two years after making A Woman Under the Influence, Cassavetes and Peter Falk reunite for Mikey and Nicky in roles somewhat similar to those in the earlier film. Falk's Mikey is the one responsible for keeping Cassavetes' Nicky of sound mind (easier said than done). It's a Cassavetes film not even directed by Cassavetes.

As proven by other titles of 1976, Mikey and Nicky also utilizes its setting as a character in of itself. Similar to Taxi Driver and Rocky, May depicts New York City as its own person. But in comparison to what Martin Scorsese and John G. Avildsen did with their respective films, May depicts the city as deceptive as some of the characters.

Mikey and Nicky is perhaps May's best film by a long shot. Yes, A New Leaf and The Heartbreak Kid are good too but there's something more to this one. Hopefully before she shuffles off this mortal coil, May will make another film of this nature.

My Rating: ****1/2
Posted by MovieNut14 at 5:08:00 PM
Email ThisBlogThis!Share to TwitterShare to FacebookShare to Pinterest
Labels: 1970s, directed by women, director: Elaine May, movies, reviews