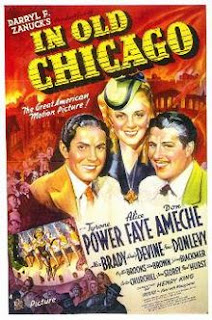 History and Hollywood make for strange bedfellows, especially during its Golden Age. Many times accuracy takes a back seat for entertainment. It hasn't improved much over the decades but sometimes it has its perks.

With Henry King's In Old Chicago, it takes liberties on the climatic fire that consumed the city in 1871. That aside, King shows (as he would in the years to come) how well he can tell a story. (That's saying a lot considering he would later make Alexander's Ragtime Band and The Song of Bernadette.)

Anyway, In Old Chicago stars the likes of Tyrone Power, Alice Faye and Don Ameche. (All three would reunite with King the following year for Alexander's Ragtime Band.) As proven by their next film with King, all three elevate the story (Power in particular).

Speaking of the story, In Old Chicago chronicles the life of an Irish family trying to survive within the hustle and bustle of the city. While the matriarch (Alice Brady) makes a honest living, one son (Power) turns to hustling while the other two (Ameche, Tom Brown) pursue more respectable lives. Unsurprisingly, conflict is regular within this tight-knit family.

In Old Chicago may have been made in response to San Francisco the previous year but it's easily a work of its own. King, a generally underrated director of Hollywood's Golden Age, depicts of nostalgia for Americana. Truly he's a name that should be held in the same regard as John Ford.

My Rating: ****1/2
Posted by MovieNut14 at 11:49:00 AM
Email ThisBlogThis!Share to TwitterShare to FacebookShare to Pinterest
Labels: 1930s, director: Henry King, movies, reviews