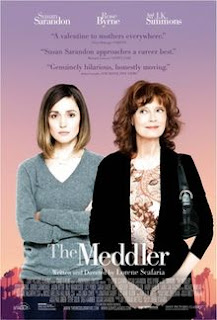 We tend to take our mother's devotion for granted. Their hard work in making sure we're fed, clothed and clean usually doesn't get so much as a "thank you". (Hey, they're the one responsible for bringing us into the world.)

Lorene Scafaria's The Meddler is a sort of tribute to that devotion, the overdue "thank you" mothers have been longing to hear. Though Scafaria doesn't portray Marnie Minervini (Susan Sarandon) as someone without flaws. After all, Marnie's only human.

As the title implies, Marnie's daughter Lori (Rose Byrne) regularly sees her mother as a nuisance in her already muddled life. But it's clear that Marnie's just trying to be a good mother. She's not trying to win mother of the year, just Lori's gratitude.

The Meddler also shows Marnie living her life in the aftermath of her husband's death. Since Lori is living her own life, Marnie decides to help those she thinks are in need for a little push. It's clear that some of the people she helps don't want to hurt her feelings by saying no but they're still grateful for her charity.

Because of Sarandon's performance, The Meddler is a work that'll make you smile a few times. It's an honest film about people and their sensibilities, how they function in the world they're a part of. And if it wasn't clear already, be sure to see this with your mother.

My Rating: ****1/2
Posted by MovieNut14 at 1:11:00 PM
Email ThisBlogThis!Share to TwitterShare to FacebookShare to Pinterest
Labels: 2010s, directed by women, movies, reviews