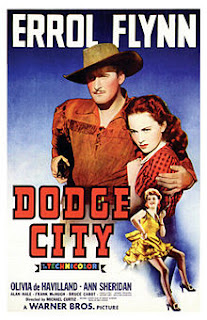 After years of playing the dashing swashbuckler (and in an attempt for Warner Bros. to keep up with the times), Errol Flynn soon started starring in westerns. Flynn himself thought he was miscast in the eight westerns he appeared in (he blamed his accent) but moviegoers didn't seem to mind.

The first of his octet of westerns was Michael Curtiz's Dodge City and with Flynn alongside regular leading lady Olivia de Havilland, it didn't take much for it to be a hit back in 1939. But how well does it hold up all these decades later?

To some, the sight of Flynn in cowboy gear may look silly but bear in mind this was someone who spent half of the previous decade in tights. Anyway, the point isn't about what he wore but how his character presented himself. And his Wade Hatton is definitely of the heroic variety.

Similar to The Adventures of Robin Hood the previous year, Dodge City is a Technicolor-drenched delight. (It certainly wouldn't have had the same effect had it been shot in black and white.) With the sweeping landscapes and a number of de Havilland's outfits, Sol Polito's cinematography is in full effect.

Dodge City may not rank among the great westerns but it's still entertaining. (And not just because of Flynn and de Havilland.) Its sense of adventure gave audiences an escape from the woes of the world. And let's be honest; considering what had yet to happen then, that's a good thing.