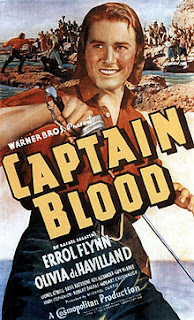 Several times during Hollywood's Golden Age, studios would pair up actors frequently based on the strength of their chemistry on screen (and sometimes off). William Powell and Myrna Loy, Spencer Tracy and Katharine Hepburn, Walter Pidgeon and Greer Garson...the list goes on and on.

The most famous screen pairing is easily Errol Flynn and Olivia de Havilland. Making eight films together in a span of six years, she was the calm to his storm. And to think their first union was the result of Warner Bros. taking a risk.

How so? When they were cast in Michael Curtiz's Captain Blood, neither Flynn nor de Havilland were the big names they would become in the coming years. (Warner Bros. had Robert Donat and Jean Muir originally in mind.) But boy, did that gamble pay off in the long run.

As often seen with their later collaborations, he's the dashing rouge while she's the independent-minded (and often only) woman. (Hey, there weren't a lot of opportunities for actresses back then.) The end result's an obvious one if you've seen enough films from the era but that doesn't matter. What matters is its entertainment value.

Captain Blood was easily the proof that Hollywood had a new leading man in the form of Flynn. His natural charisma became a selling point almost instantly. And de Havilland's radiant smile was also proof that she'll be a draw to moviegoers for years to come. Thank you, Warner Bros., for being willing to take a shot at them.