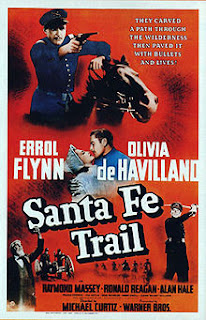 As we've learned over the years, movies can provide the best form of temporary escape. Adventure, romance, the things that take us away from the mundane aspects of everyday life. It doesn't require to be of the best quality; what matters is that it entertains its audience.

And Michael Curtiz's Santa Fe Trail falls into that category. Though it's not the strongest of Errol Flynn's adventure films, it does have its perks. (For instance, Flynn is alongside Olivia de Havilland for the seventh of eight times.)

Santa Fe Trail also features the likes of Raymond Massey and Van Heflin in villainous roles. (It also stars Ronald Reagan long before his foray into politics.) Of course the main draw of the film is the reunion of Flynn and de Havilland. (Which, to be honest, was probably the main selling point of all their films post-Captain Blood.)

Indeed Curtiz has done his fair share of action pictures prior to Santa Fe Trail but when it comes to the western, he misses the mark more than once. Yes, he was a director more interested in spectacle more than story most of the time but that's not always a bad thing. (It works well in some of his other films.)

Santa Fe Trail has its moments but overall it's the weaker of Flynn and de Havilland's collaborations. (And least they rebounded the following year.) Still, Massey and Heflin's supporting work makes the most of it. But apart from some of the names attached, there's not a lot to it.

My Rating: ***1/2
Posted by MovieNut14 at 11:48:00 AM
Email ThisBlogThis!Share to TwitterShare to FacebookShare to Pinterest
Labels: 1940s, director: Michael Curtiz, movies, reviews