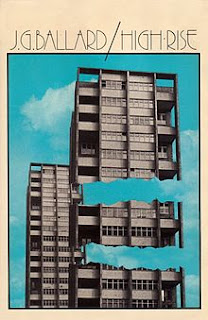 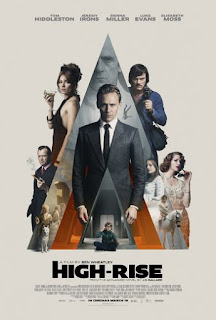 There's always been a morbid sense of curiosity towards the decline of human civilization. Works set in dystopian locations depict how far we as a society can devolve. How much closer are we to completely rejecting the many mores of life?

Of course there have been those works that managed to foretell the possible decay of what it means to be civilized. Most of these predictions were made by those who for the most part didn't live to see their fiction become reality. But the few that did must've been horrified.

"Later, as he sat on his balcony eating the dog, Dr. Robert Laing reflected on the unusual events that had taken place within this huge apartment building during the previous three months." So opens J.G. Ballard's High-Rise, establishing the novel's bleak nature. What Ballard shows in slightly over 200 pages is the swift deterioration of the titular high-rise's residents and their self-inflicted isolation from the rest of the world.

While staying mostly true to Ballard's vision, Ben Wheatley's adaptation does feature an out-of-place element of optimism. (The foreshadowing throughout is also rather blatant.) The level of debauchery is amplified further in Wheatley's hands, which adds a strange, calming dissonance in some scenes but deep-seated horror in others.

So which is better: Ballard's novel or Wheatley's film? Ballard made no bones about the inevitable collapse of civilized society while Wheatley glorifies and very nearly embraces it. (Some things are best left to the imagination.) Though it's clear which one's the preferred one.

What's worth checking out?: The book.
Posted by MovieNut14 at 10:34:00 PM
Email ThisBlogThis!Share to TwitterShare to FacebookShare to Pinterest
Labels: book vs. movie, reviews