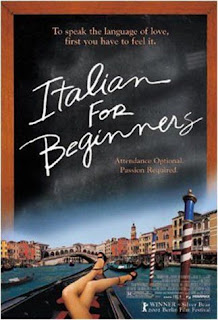 It's true that sometimes a woman-directed film solely gets recognition if they're of a raw, gritty and brutal nature. (The films of Kathryn Bigelow, Lynne Ramsay and Andrea Arnold usually apply.) But it's frequently the lighter woman-directed films that tend to get overlooked.

Lone Scherfig's Italian for Beginners for instance tends to get lost in the shadow of her later film An Education. (The latter film isn't darker per se but it isn't a bed of roses either.) But earlier in the decade, she made a charming little film about people trying to change their mundane lives.

Italian for Beginners focuses on a small group of people in a Danish suburb whose sole connection is a class of Italian lessons done mainly for a temporary shift in their weekly routines. Their lives are remarkably ordinary outside the classroom but something changes once they've stepped into it.

Scherfig's film was also a stark contrast to other titles of the Dogme 95 movement. Compared to the dark works of Lars von Trier and Harmony Korine, Italian for Beginners is a breath of fresh air, a deviation from the frequently grim nature of European cinema. (Just a casual observation, mind you.)

Anyway, Italian for Beginners is a deeply charming film. Much like the other entries of the Dogme 95 movement, it doesn't need any big spectacle to maintain its image. It only needs a good script and a keen eye, and Scherfig provides both.