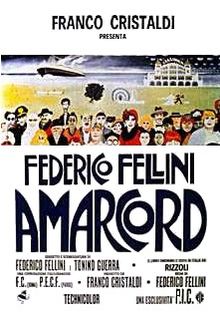 Federico Fellini is easily one of those directors that has a very distinct style to his storytelling. Many other directors have been influenced by the Italian visionary but there can be only one Fellini. Only he could have made the films accredited to his name.

His most personal film was a remembrance of the small town he grew up in. That film was Amarcord, a work with as much surreal whimsy as many of his earlier titles. But this particular film has a charm to it that can't be found in Fellini's other work.

Amarcord revolves around the townspeople of a village in fascist Italy (meant to represent Rimini, the village Fellini grew up in), the many quirks and charms held within this old town. Many films in the years to come would focus on the quaintness of small town life but only a few would match up to Fellini.

As stated earlier, Fellini is one of those directors with an almost overwhelming sense of creativity. With Amarcord, he adds a more personal touch to his imagination. It's a film about nostalgia, an aspect only a select few of creators can capture well. But Fellini does so with complete ease.

Amarcord is a generous film, a trait often seen in Fellini's work. It's the kind that wants the viewer to watch the story presented before them, nothing more. It's a concept only the true storytellers impose and again, Fellini was such a person.

Posted by MovieNut14 at 8:35:00 AM
Email ThisBlogThis!Share to TwitterShare to FacebookShare to Pinterest
Labels: 1970s, director: Federico Fellini, movies, reviews