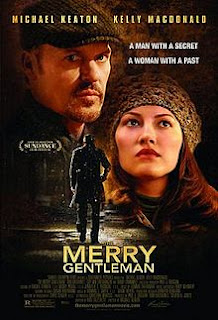 Between his last venture as Batman and his Oscar-nominated comeback in Birdman, Michael Keaton had a career of varying highs and lows. He basically went from leading man of the 1980s to character actor of the 1990s and 2000s. Regardless of that career shift, Keaton remained a welcoming face in the films he appeared in.

In 2009, he stepped behind the camera for The Merry Gentleman as well as starring in it. As of late, there have been a number of actors dabbling in directing. So how well has Keaton fared? (For the record, Keaton became director when screenwriter and original director Ron Lazzeretti stepped down due to medical reasons.)

Having a dark story set during a supposedly cheerful time of year (the Christmas season) gives The Merry Gentleman a twisted sense of humor to say the least. Being a neo-noir, the film shares elements of those of a similar nature from the 1940s. (Clearly Lazzeretti did his research.)

The Merry Gentleman features some solid work from Keaton and Kelly Macdonald. (There's also a chilling one-scene turn from Bobby Cannavale.) As with other noirs, the dynamic between Keaton and Macdonald's characters is a complex one.

The Merry Gentleman proves that Keaton is not only a solid actor, he's a very capable director as well. Hopefully he'll direct another film in the near future. (Preferably something a little more put together.)

My Rating: ****
Posted by MovieNut14 at 11:30:00 AM
Email ThisBlogThis!Share to TwitterShare to FacebookShare to Pinterest
Labels: 2000s, movies, reviews