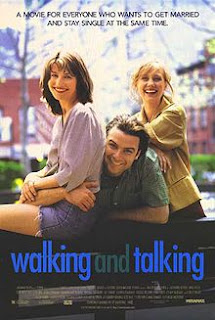 By the time the 1990s rolled around, those of the Generation X crowd were beginning to make their presence known throughout media. They expressed the plights of middle-class America, the ups and downs of causal encounters, and the sometimes harsh realities of living on your own.

Nicole Holofcener's Walking and Talking was one such film. Released not long after Friends became a regular feature for TV audiences, Holofcener's debut focuses on two friends as they balance and cope with their personal lives. (A familiar plot for fiction of this nature, yes, but sometimes different facets get the spotlight.)

It doesn't take long to see that Amelia (Catherine Keener) and Laura (Anne Heche) are of different temperaments. Laura is confident in her personal life but not her professional one. Amelia meanwhile is more insecure in the former department. These are character types that are still seen in media today.

Walking and Talking also depicts how even as one's in their thirties, they still don't know what to do with their life. (Well, Friends also showed that but the point still stands.) It's worth mentioning that there's no deadline for having your life in order. Just take small steps for those things.

My Rating: ****
Posted by MovieNut14 at 11:29:00 AM
Email ThisBlogThis!Share to TwitterShare to FacebookShare to Pinterest
Labels: 1990s, directed by women, movies, reviews