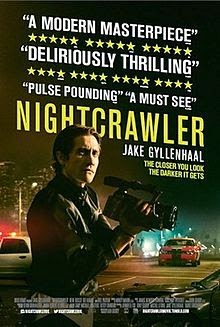 In regards with Dan Gilroy's Nightcrawler, it is most definitely the latter. Set primarily during the fluorescent-lit nights of Los Angeles, the film is, quite frankly, sheer pulp. And what pulp it is.

The film stars Jake Gyllenhaal in a role that could easily be a spiritual successor to Travis Bickle. He always remains calm (aside from one quick frightening moment), he doesn't swear (apart from one interaction), and he all in all seems pleasant. Then you get to know him.

Nightcrawler itself shows how consumed we've become with sensationalizing everything. We need everything we watch to be eye-catching and graphic. Tabloid headlines, reality TV shows, ripped-from-the-headlines movies...we've become a society that will gleefully watch humanity as we know it crumble to pieces.

Nightcrawler is a film that is clearly a mesh of Taxi Driver, Network and Drive, and it's mystifying. It's bleak, bizarre and maddening. In other words, the very things life itself can become. After all, life can be stranger that fiction.

My Rating: *****
Posted by MovieNut14 at 5:54:00 PM
Email ThisBlogThis!Share to TwitterShare to FacebookShare to Pinterest
Labels: 2010s, movies, reviews