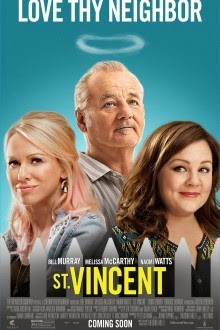 Comedies as of late have been lacking. They all have jokes that are either not funny and/or offensive to a certain demographic. (Unless that's sort of the point from a satirical way.) Can't comedies nowadays just rely on good comedic timing?

Perhaps Theodore Melfi's St. Vincent has answered those prayers. (Sorry.) It's not reliant on crass humor nor the insensitive type. Instead, it revolves around a really dry wit from the main character, something that's more associated on television than in film.

Said main character is played by Bill Murray, which is certainly a role he has specialized for the last thirty plus years. Here, he plays the role as usually expected but with some added heart to it. Sounds like a cliche, perhaps, but it's something that works.

But the film isn't just about Murray. Melfi also enlisted some other choice actors as well. Melissa McCarthy gets a nice serious role to add to her resume. Naomi Watts' role is certainly...something. But the actor who deserves the most attention is Jaeden Lieberher. Anyone who can go toe-to-toe with Murray deserves a mention.

St. Vincent is good but it's nothing too special. The script and the acting are good but overall they're not really anything to write home about. Sure, it's charming but it's just your average comedy. (At least it's not a crude one.)

My Rating: ****
Posted by MovieNut14 at 11:06:00 AM
Email ThisBlogThis!Share to TwitterShare to FacebookShare to Pinterest
Labels: 2010s, movies, reviews