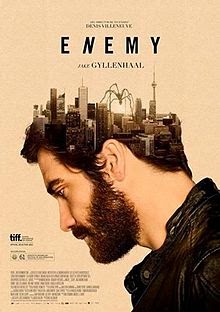 Prisoners, the last film by Denis Villeneuve, was certainly bleak and dark in its own right. (It is a film revolving around child abductions after all.) But Enemy, the newest work from Villeneuve, is both of those things as well as creepy as hell.

Starring in Enemy is Jake Gyllenhaal, who worked with Villeneuve on Prisoners. Here, Gyllenhaal does the occasionally difficult part in any actor's career: a dual role. In the wrong hands, it would be a disaster. In Gyllenhaal's, it's one hell of a performance.

The two roles Gyllenhaal takes on couldn't be any more different from each other. The first role is Adam Bell, a meek college professor. Much like Gyllenhaal's work in Zodiac, Adam slowly becomes obsessed with something happening within his life. It's really a transfixing performance.

The other role is Anthony Claire, a small-time actor. Much like Gyllenhaal's work in Nightcrawler, Anthony seems like a normal person. That is, until his true colors come to light. Again, it's a really transfixing performance.

Enemy is good though not without its problems. For starters, Gyllenhaal's the only actor to get well-rounded characters. It would've been nice to see what Melanie Laurent and Sarah Gadon could have done with their roles had they'd been more developed. But alas, this is what we have.

My Rating: ****
Posted by MovieNut14 at 10:37:00 AM
Email ThisBlogThis!Share to TwitterShare to FacebookShare to Pinterest
Labels: 2010s, director: Denis Villeneuve, movies, reviews