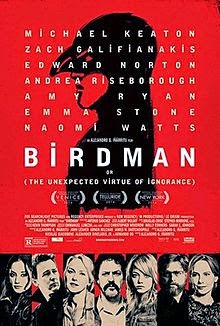 You have to admire the meta-induced irony throughout Alejandro Gonzalez Inarritu's Birdman. After all, the main character is a washed-up actor trying to escape his most famous role in a comic book movie. And who better to play that role than Michael Keaton?

But it's not just about Keaton's casting and performance that should interest you in seeing Birdman. As expected from an Inarritu film, the rest of the actors are great. Among them are Emma Stone, Edward Norton (also playing an exaggerated version of himself), Zach Galifianakis, Andrea Riseborough, Naomi Watts and Amy Ryan. (There's also Lindsay Duncan in a small but effective role.) Of them, Norton stands out the most. (Apparently self-parody is the way to go for acclaim.)

As with any piece of fiction revolving around those in the performing arts, it's only a matter of time before life starts to imitate art for the characters. For Birdman, this is applied on both a fictional and meta level (as previously mentioned). Talk about life being stranger than fiction.

Much like what Joseph A. Valentine, William V. Skall and William H. Ziegler did with Rope, Birdman is shot in a way to make it look like it was shot in one continuous take. Thanks to Emmanuel Lubezki, Douglas Crise and Stephen Mirrione, the film's story becomes more ambitious in depiction. (It's also easy to see why it's a feat not often attempted.)

Birdman is certainly an ambitious film from both a storytelling and production standpoint. It might not rank among some of the other films about show business to others but the handiwork from Inarritu and the actors will certainly keep people talking.

My Rating: *****
Posted by MovieNut14 at 11:23:00 AM
Email ThisBlogThis!Share to TwitterShare to FacebookShare to Pinterest
Labels: 2010s, director: Alejandro González Iñárritu, movies, reviews