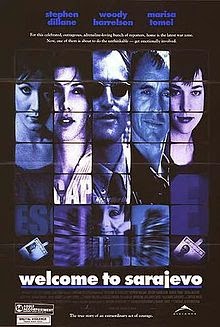 War is hell. We live in a world where we've practically gotten accustomed to the bloodshed between countries. Has there ever been a time in history where war hadn't broke out between at leas two countries?

Even amid all of the chaos, there are acts of humanity among those trying to survive. (Schindler's List provides one of the more famous examples.) Many of such stories were from the World War II era but there have been some from the last twenty or so years.

Michael Winterbottom's Welcome to Sarajevo is one such film to focus on such a story. Based on British journalist Michael Nicholson's experiences during the Bosnian War, the film depicts human behavior even in the most hellish situations. (Even when it's survival of the fittest, human endeavor can prevail.)

Being only familiar with Winterbottom's comedies (24 Hour Party People, The Trip), it was a bit of a shock to see a film of his with such brutal realism. (This was film on location shortly after the peace agreement was signed.) Winterbottom isn't interested in cheap emotions. He wants to tell a story.

It falters in some scenes but Welcome to Sarajevo stays solid in others. Thanks to Frank Cottrell Boyce's script and the work from Stephen Dillane, Woody Harrelson and Marisa Tomei, the film depicts a glimmer of hope amid pure hell.

My Rating: ****
Posted by MovieNut14 at 10:28:00 AM
Email ThisBlogThis!Share to TwitterShare to FacebookShare to Pinterest
Labels: 1990s, director: Michael Winterbottom, movies, reviews