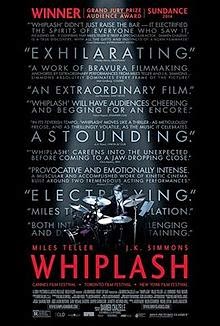 You can never be certain as to what someone is actually like. Sometimes that standoffish person is actually really shy. Or, as seen many times in fiction, the friendly, supportive person in your life is actually your worst nightmare.

Damien Chazelle's Whiplash is the latest entry to depict such a person. There have been a number of films that have played up the theme of looks can be deceiving but very rarely are they portrayed in such an intense light. (And that's saying a lot.)

The film stars Miles Teller, a familiar name in recent years from his work in teen-oriented films. Here, he joins the big leagues. He pushes himself in ways that most actors would shy away from. It's safe to say that he'll be getting meatier roles thanks to this.

Teller may be the star of Whiplash but J.K. Simmons easily steals the film. He makes his presence known whenever he's onscreen. He shoots a glare that says, "I can destroy you, and I fucking will." In short, he's brilliantly terrifying.

Whiplash is an electrifying film. Not since Sweet Smell of Success has a film used two dynamic performances like this. And the jazz. Oh, that sweet and sinister jazz. What is it about that music that brings out the beast in people?

My Rating: *****
Posted by MovieNut14 at 10:38:00 AM
Email ThisBlogThis!Share to TwitterShare to FacebookShare to Pinterest
Labels: 2010s, director: Damien Chazelle, movies, reviews