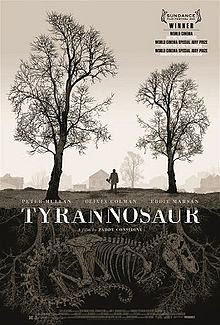 It's made quite clear early on in Paddy Considine's Tyrannosaur that Joseph (Peter Mullan) is a man with a very short temper. (Ah, stereotypes.) But it's also made clear that Joseph is a broken man as well. (We find out that Joseph's a widower.)

One day, he ducks into Hannah's (Olivia Colman) shop. Hannah, by first appearances, seems like she has everything going for her. Then it's revealed that her home life is anything but. (The first scene between her and her husband James (Eddie Marsan) drives that point home rather disturbingly well.)

There have been a number of fictional pieces involving broken people coming together but Tyrannosaur feels different from other works. It's not afraid to show the hell these characters go through. (And it can get pretty gruesome sometimes.) Though it does get a little too involved in some of this hell.

Onto the performances. Marsan is unnerving in the scenes he's in. Mullan in turn shows a warmer, more welcoming side beneath that fiery nature. But the star of the film is easily Colman. Thank God she's become more in demand in recent years.

Even though it gets bogged down in its own darkness, Tyrannosaur is still a good film. (Would you believe this is Considine's first foray as a director?) Thanks to the work from Mullan, Colman and Marsan, the film shows the darker side of human nature.

My Rating: ****
Posted by MovieNut14 at 10:02:00 AM
Email ThisBlogThis!Share to TwitterShare to FacebookShare to Pinterest
Labels: 2010s, movies, reviews