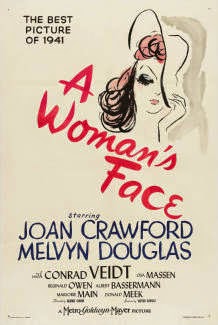 George Cukor is a name synonymous with "women's pictures". Films like The Women (of course), The Philadelphia Story and A Star is Born. Suffice to say it must have felt unusual when he made A Woman's Face, a film noir.

That said, however, A Woman's Face does maintain the common trait of Cukor's other films like Camille and Born Yesterday: women trying to survive in the society they're a part of. And of course with this being a noir, that's the main theme of the film. (Who said this had to be a man's genre?)

In the lead role is Joan Crawford, who at time was only known for glamorous roles like The Women. Here, she got a chance to show off her abilities as an actress. And thank God she got meatier roles as a result of it too (such as her Oscar-winning work in Mildred Pierce).

Also worth mentioning is the way A Woman's Face is shot and framed, courtesy of Robert Planck and Cedric Gibbons. As the title implies, one of the main focuses is that of Crawford's character's face. (The right side of it is heavily scarred for the first third.) Because of this, Crawford is often shot from the left throughout the film. A small detail, but one worth mentioning.

A Woman's Face is a lesser-known film of Cukor and Crawford's careers and it's hard to see why that is. It's as concise as any other noir out there (though to a certain point) and it's just as good as the other films released the same year (The Maltese Falcon, The Lady Eve). So, please, seek this film out.

My Rating: ****
Posted by MovieNut14 at 10:56:00 AM
Email ThisBlogThis!Share to TwitterShare to FacebookShare to Pinterest
Labels: 1940s, director: George Cukor, movies, reviews