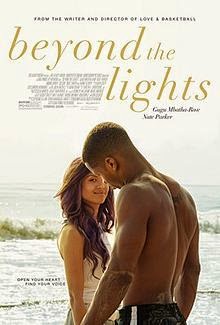 You know how with most female-led films, the plot almost always revolves around the leading lady finding the man of her dreams. (It should be pointed out that these films are often directed/written by people who follow too many Hollywood cliches.) Thankfully, there have been exceptions. (If there weren't any, there wouldn't be anything good to watch.)

Gina Prince-Bythewood's Beyond the Lights is one of the new entries featuring a strong female lead. (And a very good one too.) Indeed, the film has a romantic storyline but there's more to the film than that. It's also a story of a woman trying to survive through life.

The film's two leads are Gugu Mbatha-Raw (previously seen in the excellent Belle) and Nate Parker. Both actors are relatively new to audiences, but hopefully they'll get more recognition thanks to this. They're both fantastic here.

A few small flaws aside, Beyond the Lights is great. Thanks to the work from Mbatha-Raw and Parker, the film proves that this is the kind of film we should be getting more often. Just something to keep in mind, you know?

My Rating: ****1/2
Posted by MovieNut14 at 9:59:00 AM
Email ThisBlogThis!Share to TwitterShare to FacebookShare to Pinterest
Labels: 2010s, directed by women, movies, reviews