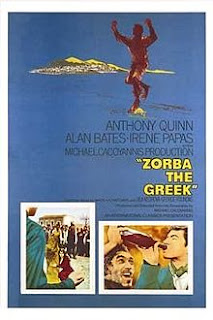 When Basil (Alan Bates) first meets Alexis Zorba (Anthony Quinn) early on in Michalis Cacoyannis' Zorba the Greek, it's made very clear they're from different ends of the spectrum. Basil is a reserved British writer while Zorba is a Greek who goes by his own rules. Yet somehow they become friends.

Basil is amazed by Zorba's zest for life. Zorba feels the same towards Basil's lack of it. When they head to Crete, Basil embraces the lifestyle of Zorba's people while Zorba embraces Madame Hortense (Lila Kedrova), the owner of the town hotel.

Zorba the Greek is strictly about Basil or Zorba. The film also revolves around the small community they're in. The people that are a part of the community have their own rules and morals. Cross those rules and morals, and feel their wrath.

The actors are very good. Kedrova possesses a quiet longing with her Madame Hortense. Bates in turn quietly observes the many happenings around him. (There is also a very lovely scene between him and Irene Papas.) But this is Quinn's show. After all, this is an actor who often stole the spotlight from his co-stars. (I am intrigued that they got a Mexican actor to play a Greek.)

Zorba the Greek is a very charming film. Thanks to Quinn and Bates' performances, the film just resonates its dark yet touching themes. Walter Lassallly's cinematography gorgeously captures the Greek countryside. And that final scene provides solid testament as to why I love film.

My Rating: *****
Posted by MovieNut14 at 11:45:00 PM
Email ThisBlogThis!Share to TwitterShare to FacebookShare to Pinterest
Labels: 1960s, movies, reviews