We Own the Night 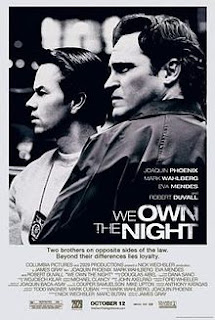 There are actors that usually deliver their best work when in the hands of a certain director. Would the career of Robert De Niro (or Leonardo DiCaprio) gone anywhere had he not worked with Martin Scorsese? Jack Lemmon without Billy Wilder? Marlon Brando without Elia Kazan? (The answer to all of them: probably not.)

A recent, more understated collaboration is James Gray and Joaquin Phoenix. Gray is still trying to make a name for himself while Phoenix has been a noted actor for years. I first noted their work together in the form of Two Lovers, Gray's most recent film. It was the quiet but deep performance from Phoenix that made the film get ranked as a personal favorite of mine. But it wasn't until much later that I realized I should see another film of theirs.

I opted for their 2007 collaboration We Own the Night, which several bloggers I know call one of the best films of that year. It's clear as to why. This is the kind of film that Scorsese or even Coppola would have made back in the 70s because man, you can feel elements of Mean Streets and The Godfather in certain scenes.

The film isn't just about Phoenix. The cast also includes Mark Wahlberg, Eva Mendes and Robert Duvall, all of whom are great in their roles. It's a great cast but this is Phoenix's show. This is more proof that he's one of the finest actors working today.

We Own the Night is a really great film. You can tell Gray is providing a nice homage to the crime films of the 70s just from watching this. Every element works in every scene, nothing feeling out of place at any point. Here's hoping Gray gets the recognition he deserves because damn. He really knows what he's doing.