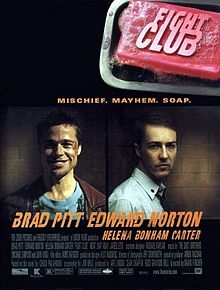 It takes a lot for anyone to depict the complete mayhem within a society. Sometimes it doesn't even take too much imagination  since such mayhem happens every day in real life at every waking moment. (It's true. Just pay attention to the news.)

Also look at Fight Club. The mayhem throughout the whole story is insane on every level yet it seems sane when in comparison to anything that happens in real life. (Believe me, I know life is weird.)

Chuck Palahniuk's writing style is sporadic, manic and completely off the wall. And I love it. Usually manic writing styles put me off, but Palahniuk somehow drew me in. Maybe it was just the story he told, but who knows? (Not me, that's for sure.)

I think had I not read Palahniuk's novel, I wouldn't have understood David Fincher's film in the slightest. (Then again, I might have been able to if I tried hard enough.) But Fincher, Edward Norton, Brad Pitt and Helena Bonham Carter know how to make Palahniuk's outlandish story come to life.

Both Palahniuk's novel and Fincher's film both depict the very dark side of anarchy and nihilism. But Fincher's film makes understanding the story Palahniuk originated more easier. (Palahniuk himself said that Fincher improved his novel.) Also, is it weird that I think Fincher's film could make for an interesting double feature with Paul Thomas Anderson's The Master?

What's worth checking out?: The movie.
Posted by MovieNut14 at 9:06:00 PM
Email ThisBlogThis!Share to TwitterShare to FacebookShare to Pinterest
Labels: book vs. movie, director: David Fincher, reviews