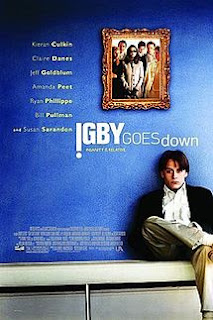 Within the opening moments of Burr Steers' Igby Goes Down, we get a glimpse into the very dysfunctional life of Igby Slocumb (Kieran Culkin). Think of the world he lives in as a more eccentric Wes Anderson film.

Igby is from a family of wealth, but he could care less. He cares even less about his family itself. His father Jason (Bill Pullman) suffered a mental breakdown and is now locked away in a mental institution. His mother Mimi (Susan Sarandon) drinks and pop pills like nobody's business. His brother Oliver (Ryan Phillippe) invades his personal life at terrible times. (Be honest. Even your family isn't this messed up.)

The story Igby goes through is worthy of what Holden Caulfield goes through in The Catcher in the Rye. (I wouldn't be surprised if Steers used J.D. Salinger's novel as an influence.) He gets kicked out of school, he doesn't get along with his parents and he takes refuge in New York City. One could say Igby and Holden are blood brothers.

The actors are very good. Sarandon and Phillippe display the unwanted pretentiousness in Igby's life. Amanda Peet and Claire Danes play the other women in Igby's story, and both deliver. (There's also a very amusing small performance from a pre-Mad Men Jared Harris.) But this is Culkin's film. Culkin, who was also one of my favorite things about Scott Pilgrim vs. the World, depicts a complete nonchalant attitude towards, well, everything.

Igby Goes Down is good though I wouldn't highly recommend it. I say that because it's spotty in parts. It's still pretty good for a directing debut. Maybe I'm being sympathetic because I'm like Igby most of the time. Who cares? Just watch it for yourself.

My Rating: ****
Posted by MovieNut14 at 11:19:00 PM
Email ThisBlogThis!Share to TwitterShare to FacebookShare to Pinterest
Labels: 2000s, movies, reviews