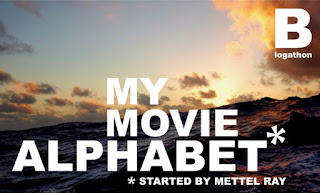 Mettel has a new blogathon that's been floating around the internet for a while. I figured, what the hell. I'll join in too. But my list will look lackluster (say that three time fast) because I don't have the skill and/or ability to make good graphics like every other blogger doing this. Aw, screw it. I've got good choices. (However, I'm skipping over X because I don't have a good entry for it.)


Might as well start off this list right with a very underappreciated film that I think everyone should see. Made when everyone was still numbed by the events of September 11, 2001, Spike Lee came along and had us open our eyes to the collateral damage (both physical and emotional) left behind. Try not to get chills from that overhead shot of Ground Zero.

The Master of Suspense himself. Pretty much all of the films of his I've seen I adored simply because he knew what he was doing. (The British are sneaky like that, you know?)

One of the most heartbreaking films I've seen all year? Absolutely.

Every now and again, you stumble across a film that's unlike most anything else you've seen. That's how I felt when I saw Anton Corbijn's debut last year. I really hope Sam Riley gets some good parts in the near future.

The Master of the Mindfuck. Amusingly though, my favorite film of his isn't one that left completely confused. (That narrows down his filmography considerably.) The film in question is The Elephant Man, which is quietly poignant and devastating. (Not sure if many have seen it, to be honest.)

When I saw Scott Pilgrim vs. the World this summer, I immediately regretted A) not seeing it sooner and B) not seeing any of Wright's other movies beforehand as well. As of now, I've also seen Shaun of the Dead and Hot Fuzz, and I look forward to his next movie.

I contribute this man to getting me into foreign films. (He also got me interested in his frequent leading man Marcello Mastroianni, but that's for another time.) There have been a number of other foreign directors, but I'll always rely on Fellini.

The baby boom crowd had James Dean. Generation X had River Phoenix. We had Heath Ledger. All great actors who left this earth way too soon. Who knows what they would have contributed had they lived longer.

The best love stories, in my eyes anyway, are those where the hopeful couple never even get to say "I love you" to each other. It's the longing between them that makes it all the more heartbreaking. That's precisely what Wong Kar-Wai depicts in this.

Cassavetes is pretty much responsible for introducing Hollywood to a new type of film: independent. And boy, his films were bold, even by today's standards. (Watch A Woman Under the Influence and talk to me later.)

I know someone will appreciate this one. How could you not admire someone like her? She was a bold star back then and even today many actresses call her an influence.

Try to find an epic better than this. You won't.

Can we just agree that Scorsese is the most awesome director working today? Not only are his films great, he is also truly passionate when it comes to film. (I could listen to him talk about film all day if I wanted to.)

A vicious performance from Judi Dench + a vulnerable one from Cate Blanchett + one hell of a story = a film that has to be seen to be believed.

I think this is one of the more underappreciated westerns. I'm not sure why. Maybe because it's not a standard western. But it definitely deserves a look regardless.

One of the most gorgeous actors I have ever seen, that's for sure. And the fact he could actually, you know, act makes him all the more appealing. And those eyes of his are to die for. *sigh*

It's weird that my favorite film of his is the one some fans call a bad follow-up to Pulp Fiction. (It's Jackie Brown by the way.) Also weird that his films have pretty much numbed me when it comes to Hollywood violence. (I still go "WHAT THE FUCK" at times though when I'm watching Breaking Bad.)

Hmm, what to say about Mr. Downey? Talented, sexy as hell, charming...what else can be said?

You'd think for someone who's been in films like Moon, The Green Mile and Confessions of a Dangerous Mind would have at least an award or two. But nope. He doesn't even have a Golden Globe nomination! Here's hoping he'll get some from his insane work in Seven Psychopaths.

I still maintain that Malick's film is better than Saving Private Ryan. (Not by a huge margin, mind you.) I think it because he managed to capture peace within the carnage.

It's Jill Clayburgh's performance that undoubtedly won me over. I first saw it a few months after her death, and I realized not only I should have seen it sooner, but we also lost a very fine actress.

Another underrated film with a stunning performance. It's amazing that this was even made back in 1961 considering the social norms in England back then. But Dirk Borgarde's performance is one you don't forget easily.

Considering I love every single film of his and he directed one of my favorites from this year, it would seem wrong not to include him. Oh, and the premise and cast for his film sounds right up my alley.

Earlier this year, film lovers were buzzing over Kenneth Lonergan's newest film Margaret upon its release to DVD. And yet not many people were talking about the film that started Lonergan's career as a director. With great work from Laura Linney and Mark Ruffalo (my personal favorite of his work), it's hard to see why even twelve years later it hasn't earn the recognition it deserves.

Well, what else were you expecting? (Not many good movies starting with the letter "Z" to be honest.) I'll admit I really need to re-watch it, but what I remember of it is fantastic stuff. Oh, and that scene in the basement. Jesus.

I always hate doing these things, but I still like the outcome. (Yeah, I don't get it either.)
Posted by MovieNut14 at 9:05:00 PM
Email ThisBlogThis!Share to TwitterShare to FacebookShare to Pinterest
Labels: blogathon/meme, photos