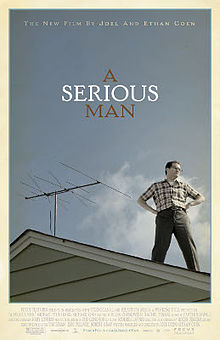 It's amazing that Larry Gopnik (Michael Stuhlbarg) doesn't go mad at some point in Joel and Ethan Coen's A Serious Man. I mean, with all of the immense stress he undergoes, it's almost impossible not to completely snap under pressure.

What are some of the things Larry goes through? Let's see...his wife wants a divorce, his brother won't leave (or do anything productive), his kids are driving him crazy, and a student is blackmailing him. (Believe me, I'm trying to make it sound less hectic than it actually is.)

The Coens based A Serious Man partly on their upbringing. (It makes me wonder what the hell happened in their early life that inspired their films.) It shows that suburbia in the 1960s wasn't ideal as most films from that very era depicted. Ah, hell in the form of reality. Gotta love it.

I also have to talk about Roger Deakins' cinematography. (Again, how has he not won an Oscar or three by now?) He captures the harshness of home life pretty much effortlessly. (Then again, he did shoot Revolutionary Road as well.)

A Serious Man is quite good though I can't bring myself to say that I loved it. It's not exactly my favorite film of the Coens either. (That goes to O Brother, Where Art Thou?) Still, I can understand why many liked it so much. (Personally, it's just another film off my list.)