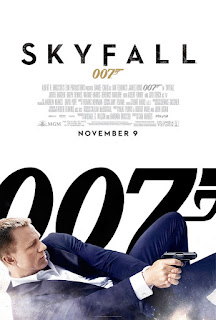 When you look at the small but extensive filmography of Sam Mendes, you can tell he's interested in stories about the everyman and the life they lead. Suffice to say his newest film Skyfall feels out place when in the likes of American Beauty or Revolutionary Road. That doesn't mean it's a bad film. Oh no, not at all.

Even though the James Bond franchise has now been around for fifty years, I'll admit I'm not well versed in the world of 007. (The only other Bond film I saw was Casino Royale.) That said, I still managed to get the few throwbacks to previous entries that were in Skyfall.

The cast is great. (Then again, with names like these, what else would you expect?) Daniel Craig is essentially perfect as James Bond. (Boo to those that say he isn't.) Judi Dench is also perfect as M. Javier Bardem is equally ideal for the role of villain Raoul Silva, displaying a nice balance of creepy and straight-up unhinged. Supporting actors Ralph Fiennes, Ben Whishaw, Naomie Harris and Albert Finney are also great. Wonder what the cast for the next one will be like?

The many other aspects of Skyfall are also to die for. Adele's theme song is (pun slightly intended) pitch perfect. Same can be said for Thomas Newman's score. But I must talk about Roger Deakins' cinematography. The pure gorgeousness of it makes the film come alive. I would be ecstatic if Deakins got nominated, more so if he finally won.

I must say, this year has been pretty great for actions films. First The Avengers, then The Dark Knight Rises, now Skyfall. Mendes seems like an odd choice at first but when you see the final result, you realize he was perfect for the job. But if you had seen his unjustly underrated Road to Perdition (which co-starred Craig), then you know Mendes could depict action and violence without overdoing it. In short, Skyfall is awesome.