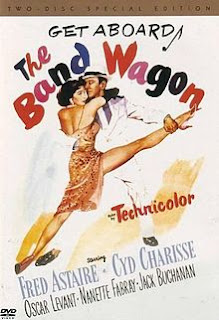 Anyone who has seen enough musicals from Hollywood's Golden Age knows you have two song-and-dance men to choose from: Fred Astaire and Gene Kelly. Both were very different; Astaire provided elegance with his dancing whereas Kelly was more aggressive. Kelly himself said it best: "If Fred Astaire is the Cary Grant of dance, I'm the Marlon Brando."

Even though the dancing styles are different, amusingly their careers were somewhat similar. Both started out in show business with their siblings. Years later, both displayed their abilities as legit actors around the same time. (For Astaire, it was 1959's On the Beach; for Kelly it was Inherit the Wind the following year.)

Also within a year, both had the leading role in a prominent MGM musical. Kelly of course had Singin' in the Rain whereas Astaire had Vincente Minnelli's The Band Wagon. Both films were written by Betty Comden and Adolph Green, and their roles were that of movies stars whose careers are in trouble. (Ironic on Astaire's part since The Band Wagon was made when his career was at a standstill.)

The Band Wagon itself is mainly all right. Some of the musical numbers feel out of place. (It makes sense when you realize only three songs from the original stage production made it into the movie.) But of the musical numbers, my favorites were "Dancing in the Dark" and "I Guess I'll Have to Change My Plan". Also, it made me realize that I have to see one of Astaire's movies with Ginger Rogers soon. (Can't believe I haven't yet.)