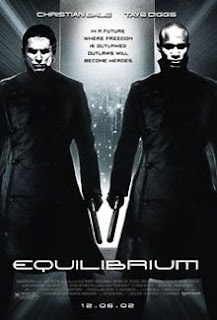 What would it be like to live in a world where freedom of expression is no longer free? What if the very things that made us who we are became illegal? It's a horrifying prospect, especially with the censorship laws throughout the world.

Kurt Wimmer's Equilibrium explores the possibility of such a world existing. All forms of expression -- literature, music, art -- are banned and those found with them will be executed. In order to stay unaffected, everyone is administered a drug which suppresses all emotion.

Wimmer's vision is almost like what Ray Bradbury did with Fahrenheit 451. Something that's in our life every day is suddenly forbidden, a simple object that is deemed dangerous for our mental health. Sure, it's understandable how a few books or a couple paintings could get some controversy, but becoming qualified to be destroyed? Practically horrifying, especially coming from someone who appreciates the arts.

However, the main flaw of Wimmer's vision is his apparent need to include violence into the story. I suppose it's mainly because everyone's a living, breathing sociopath under the drug, so the need to kill someone is inevitable. Seems like a strange response to the drug though.

Equilibrium provides an interesting concept but it gets bogged down thanks mainly to the violence aspect. Maybe if that was removed, this would be ranked alongside THX 1138 and Blade Runner. Instead, it falls face first into guilty pleasure territory. And that's where it intends to stay too.

My Rating: ***1/2
Posted by MovieNut14 at 11:15:00 PM
Email ThisBlogThis!Share to TwitterShare to FacebookShare to Pinterest
Labels: 2000s, movies, reviews