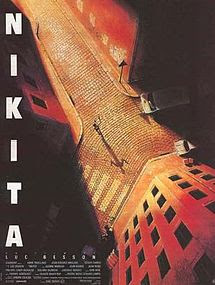 When we first see the title character of Luc Besson's Nikita (or La Femme Nikita as it's commonly called), she is clearly zoned out, oblivious to the mayhem going on around her. As the film progresses, she becomes more focused and driven.

Nikita is played by Anne Parillaud. She provides the appropriate amount of sex appeal and cunning behavior needed for the role. That said, there isn't much else for Parillaud to do. The role mainly consists of her being in either a skimpy outfit or her underwear. (Well, later on in the film anyways.)

Besson is one of those directors who's accused of preferring style over substance. With Nikita being the first film of his I saw, I can't really confirm it. I will say I definitely felt it from Nikita. (Probably not a good note to start on.)

Speaking of the film's style, it is pretty nice. Thierry Arbogast's cinematography and Eric Serra's score make the most out of the film. Though to be honest, those are the main highlights of Nikita.

All in all, the film's all right. There are a few sequences that are good, but that's about it. It's definitely clear that it was made in "the MTV era". (Just saying.) I just hope The Professional won't be like this.

My Rating: ****
Posted by MovieNut14 at 11:31:00 PM
Email ThisBlogThis!Share to TwitterShare to FacebookShare to Pinterest
Labels: 1990s, movies, reviews