The Ballad of Jack and Rose 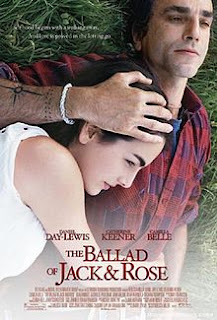 Rebecca Miller's The Ballad of Jack and Rose is different from the many eclectic titles of 2005. Rather than being a film boasting of its importance, it's a much more quieter title.

The film stars Miller's husband Daniel Day-Lewis as Jack Slavin, which is one of his more underrated performances. It's hard to say why that is. Maybe it's because it's a different role from some of his more famous performances. (My theory is because this was made between Gangs of New York and There Will Be Blood.)

However, the star of The Ballad of Jack and Rose is Camilla Belle. (She plays Rose.) The way she views the world she inhabits is mystifying. So does the way she interacts with the people around her. I hope to see more of her.

It may sound odd, but this particular film reminded me of Beasts of the Southern Wild. Both films revolve around a father, his daughter and the small world they've created for themselves. In fact, that would make for an interesting double feature.

The Ballad of Jack and Rose is actually a quite fascinating little film. Day-Lewis, as per usual, is great. The supporting cast is also very good. But this show belongs to Day-Lewis and Belle. Oh, and be sure to check this out.