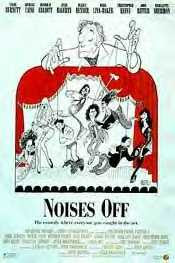 If you think working on stage is easier than working on screen, think again. You have to remember many lines without getting a break. You only have one shot to get it right.

Just imagine how much of a headache Lloyd Fellowes (Michael Caine) had throughout Peter Bogdanovich's Noises Off. Even during the actual performance his actors can't keep their minds focused strictly on the play. The off-stage drama seep into the on-stage antics.

Think of any possible dilemma, and it's very likely those involved with the production of Nothing On (the play within the movie) went through with it. Affairs, drinking problems, stress from rehearsals...you name it, they through it. Oh, the theater life must be a glamorous one. (Not really.)

The cast Bogdanovich wrangled together is pretty good. Caine is quite good as is Carol Burnett. My favorites, however, were John Ritter and Christopher Reeve as two of the bumbling actors of Nothing On. Their comedic timing was priceless.

Noises Off as a whole is an all right movie. It got a little too screwball as it wore on, but the performances kept my interest throughout. Is it something I'd recommend? Sure, but mainly to those who want a laugh and only that.