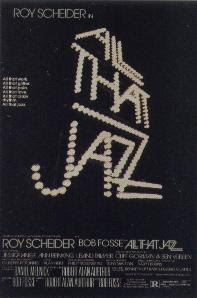 When the name Bob Fosse is mentioned, Cabaret is usually the main film that springs to mind. Not many are perhaps aware of his non-musical films.

One such title is the semi-autobiographical film All That Jazz, which was also his penultimate film. Based on his experience from directing Chicago for the stage, the film shows the chaotic balance between work, pleasure and reality.

Fosse is in the form of Joe Gideon (Roy Scheider), a chain-smoking, pill popping, skirt chasing director. Like Fosse, Gideon's lifestyle of booze, cigarettes, pills and women takes one hell of a toll on his health. Throw in the fact he's working on a troubled musical, and he's on the route to the emergency room.

The film is even more haunting in the knowledge that Fosse intended it to be his final film. (His final film, however, was Star 80, released four years after All That Jazz and another four years before Fosse's death.) He knew his vices were going to win that final battle sooner or later. Might as well (try) to end your career with a bang.

All That Jazz definitely ain't your grandmother's musical. Like Fosse's previous film Lenny (which is also a brilliant film), it's more of a portrait of a man who fought many personal battles and lost most of them. Scheider, in a performance very much far from his Jaws role, is fantastic as someone who just didn't know when or how to quit. Truly fantastic work.