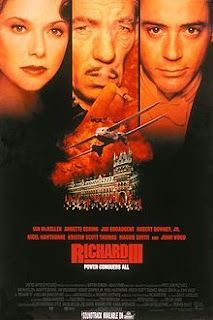 Richard Loncraine's adaptation of William Shakespeare's Richard III is just one of several filmed perspectives of the Bard's work I have seen. (Others include Laurence Olivier's vision of Hamlet and Akira Kurosawa's Ran, a retelling of King Lear with a Japanese twist.)

But regardless, I am still a novice to Shakespeare. (I have only read Romeo and Juliet.) It's not that I don't like his work; it's just the way he wrote is hard to follow at times. That's my only problem with this film. It's difficult to grasp in spots.

The star of Richard III is Ian McKellen, who just makes this role his own. It's a somewhat showy role, but McKellen knows when he's gotten to the peak of the role's flashiness. He ain't Gandalf here. (Also, he was robbed of an Oscar nomination, I kid you not.)

This version of Richard III isn't set in the time period of Shakespeare but rather in 1930s England, an era and place where the fissures of chaos were beginning to show. A fitting move since the play speaks of an internal war more explosive than the battle waging on in other countries. Oh, how I love parallels between fiction and reality.

I know that it isn't entirely faithful to Shakespeare's play, but this is a very fascinating watch regardless. Witnessing someone descending into greedy madness is straight up hypnotizing. And McKellen such an insanity to a T. Oh, and it also has the best use of the famous line "A horse! A horse! My kingdom for a horse!"

My Rating: ****1/2
Posted by MovieNut14 at 10:53:00 PM
Email ThisBlogThis!Share to TwitterShare to FacebookShare to Pinterest
Labels: 1990s, movies, reviews