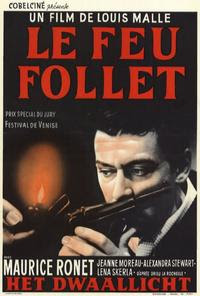 You know how sometimes you develop a desire to see a film after reading someone's glowing praises for it? Most of the time it's for a film not many have seen. (It's often for a foreign film too.)

Now Alex has perhaps the best taste in film among the many bloggers I've gotten acquainted with. Thanks to another one of his fantastic lists, he introduced me to a film he speaks highly of: Louis Malle's The Fire Within. Did I have the same feelings for it as Alex? Just read on.

The film chronicles a day in the life of Alain Leroy (Maurice Ronet), a writer and recovering alcoholic. By this point, he's coming along well with his treatment, but outside life tempts him. The result is something worthy of a Bergman film.

Alain isn't proud of his past drunkenness. In one scene, someone tells an anecdote of a drunk's incident. Someone else points an accusatory finger at Alain, identifying the drunk in question. The camera cuts to Alain, his eyes now sunken into his head. That lone scene shows how much of his former vice has stayed with him.

The Fire Within is just fascinating to watch. Rather than it being about an addict slipping deeper into their problem, it's about someone on the path to recovery that takes a wrong turn. Along with Ronet's performance and Malle's direction, there's some marvelous cinematography from Ghislain Cloquet. This is also one of the most neglected foreign films I've seen, so I encourage you all to check it out. You won't regret it.